Negative effect from treatment; it could give more pain…

The magical exercise that will fix your pain

You continue reading a bit more to read the comments below the article to see if there are people who share their experience doing the exercise.
You do indeed see a number of reactions, but these are not very positive.
For example, someone says that by doing the exercise, his spine has become crooked and someone else says that his pain has only gotten worse.
You stop reading and you hear yourself thinking “hmmmm that doesn’t sound too good, I don’t want to get a negative effect from any treatment I’m doing, so I wonder if it is actually a good idea to do that exercise”. Then the next voice comes into your head that says “these are only 2 bad experiences, you don’t know if those people did the exercise correctly to get this negative effect?!”. You think hmmm yes that sounds legit, so let me try it anyway.

The expected worst back pain ever…

You do the exercise, you just spent 2 days doing it and the 3rd day you wake up with the worst back pain ever!
You think there is no other way than that this is because of that exercise, because I have done nothing else abnormal in the past 2 days! I knew it! Those people in those comments have said it! I should have just listened to my first prompting! Damnit!

You did the exercise, but you had in mind a certain expectation of a doom-scenario that could happen, a negative effect from treatment. After all, that had happened to other people too…

The cause of the increase in chronic pain.

Was it the exercise itself or your expectations of a negative effect from the treatment that caused the doom-scenario to unfold?
Both might be possible. Although it seems unreal to me that if you are a reasonably wise person and this is really an extremely bizarre weird exercise, you should not do this anyway. And if you are indeed a reasonably wise person, I think it is also pretty unreal that you have really performed the exercise so extremely bad that this can cause so much pain increase.
But okay those are assumptions I make here. So, let’s say it can. Then the exercise has caused more pain, you have indeed gotten a negative effect from the treatment and so you no longer do the exercise.

The harmful effect of expectations

YOU can influence negative effects yourself

Another example is a nocebo study that was done on 40 asthma patients. (2)
There were 2 test situations.
In the first test situation, the asthma patients were told that the inhaler contained an allergen or irritant.
In the second test situation, the asthma patients were told that the inhaler contained a drug that would relieve their symptoms.
However, in both situations only water vapor was used in the inhalers.
Nevertheless, 48% of the 40 patients with the so-called allergen or irritant experienced asthmatic symptoms.
And 30% even experienced full-blown asthmatic attacks. The by the patients expected negative effect from treatment happened.
When taking the inhaler with the so-called medicine, the airways opened again.
That the symptoms were drastically reversed by taking the so-called medicine while it was just water vapor shows how strongly expectations influence.
Their thoughts in this case were stronger than their environment, stronger than reality. So their thoughts created a totally new reality.

Let me hear you down below in the comment section! 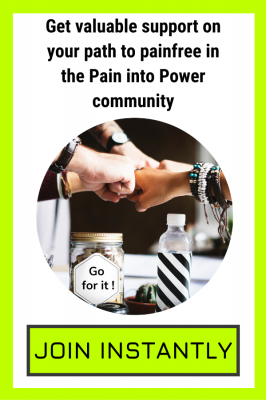 The laundry basket theory, THE solution? You are the placebo!

How your conditioning is maintaining your back pain

This book will help you heal your TMS chronic pain:

Change your belief system with this book:

My favorite green juice to nourish the body <3

Best waterfilter bottle for the purest cleanest water for a healthy body!